I have a ballard serial no.501. center line on left of action is upside down. wondering what I have?
Top

Really need more information on your Ballard rifle. What is the caliber of this Ballard? Is the receiver marked J. M. Marlin or Marlin Fire-Arms Co.?
Looking forward to your reply........
Due to the increasing cost of ammunition, there will be no warning shot!

The growing federal deficit = generational slavery to the national debt.

A Ballard #1 will always have a full round barrel. A #2 will be in smaller calibers and have a rectangle firing pin most the time. A few exceptions for certain calibers.
Very weird to hear of a 3 line rollstamp, and the center line being upside down!
What caliber is your gun?
Marlin lever actions 1870's-WWI, Ballards, and single shot rifles!
Top

Sure seems to match the specs for a #2 Ballard. Caliber, 3 line address, full octagon barrel; all spell #2 Ballard. Probably has a rectangle shaped firing pin too if you cock the hammer and look at the rear of the firing pin.
Guessing a #2 that early might also have the Brown style lever that bends back under itself. Some have ahole in them, and some also have a pin in the frame that fits the hole.
Bottom and top guns here have the Brown levers. Middle has the most commonly seen #2 style S lever. Top to bottom are #1, #1 1/2, and #4 Perfection: 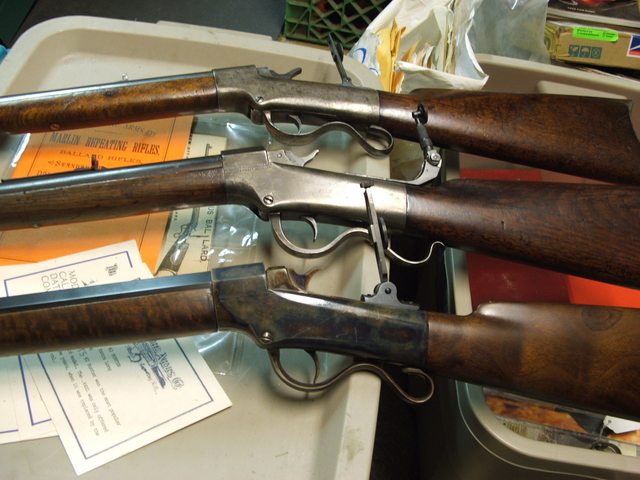 Thanks, it does have the brown type lever. I read somewhere that the number 2 started at serial no. 500 or 501. they may have corrected the roll stamp after that. Thanks
Top

I've always assumed the rollstamp on the left side of a Ballard was done one line at a time, whether it's a 2 line or a 3 line. So I'm guessing a new rollstamp was accidentally put into the fixture upside down and the 2nd line rolled upside down. Likely it was caught and reversed, but how many were rollstamped prior to catching the mistake would be unknown? Yours might be the first, and they immediately caught it.
John Dutcher mentioned in his book he's recorded #2 Ballard rifles in serial numbers from 545 to 39570. So yours is lower thn what he had recorded prior to writing his book. It's really unknown what the lowest serial number is for a #2, but they were built every year that Marlin built Ballard rifles. More #2's are seen than any other model, and they were the least expensive Ballard Marlin offered. The base #3 Gallery was the same price, and it was a good seller, but not as good as the #2.
Marlin lever actions 1870's-WWI, Ballards, and single shot rifles!
Top
Post Reply
7 posts • Page 1 of 1