Anything to do with Rimfire guns 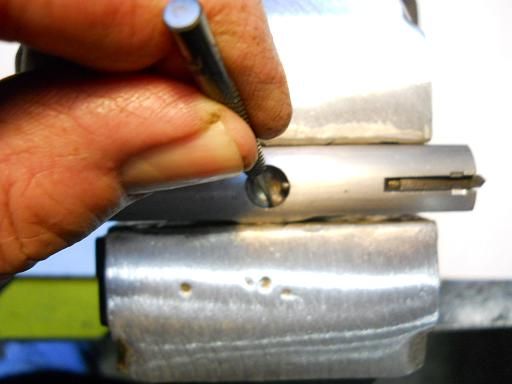 In this series of photos I show the process of removing the firing pin from the breech bolt of the Marlin A1.
The retaining pin for the firing pin is in a almost blind hole,except for a little half moon opening in which you need a
VERY small drive pin punch. Be aware that sometimes the top of the hole holding the retaining pin has been staked over.
This metal will have to be removed before attemping to push out the retaining pin.
While you have the firing pin out this is a good time to clean it of built up powder residue.
The firing pin should move freely.
"Let there be Welders,to attach metal things to other metal things"
Top

Re: Marlin A1 firing pin removal

I have an A1 with the bolt's small parts missing. Is there a source for parts for these rifles? Numrich doesn't have them.
"Bother" said Pooh,
as he loaded another round.
Top

Re: Marlin A1 firing pin removal

Bigdog,
You might try Jack First Gun Parts, Dick Williams Gun Parts, to name just a couple places or look on eBay or some of the other auction sites.
What parts are you looking for?
"Let there be Welders,to attach metal things to other metal things"
Top
Post Reply
3 posts • Page 1 of 1