Anything to do with gun smithing.
Post Reply
9 posts • Page 1 of 1

- In lieu of the above, does anybody have a disassembly guide. This model looks a little different than the 1894 that is out there.

Thanks in advance,
Jim
Top

Thanks for the information. I had never taken down a lever model Marlin until now. Quite impressed with the simple design.
Top

Jmyers1 wrote: ↑Thu Nov 08, 2018 8:56 am Thanks for the information. I had never taken down a lever model Marlin until now. Quite impressed with the simple design.

Almost hate to admit this, but back in the 1970's I had a small collection of Winchester Model 1894 rifles. Like others I knew, I thought of Marlins as 2nd behind Winchesters, so didn't even look at them. Then I got into a Model 1893 by accident when I was selling a 1894 SRC in .25-35 and took an 1893 takedown in .25-26M as partial trade in the deal.
Of course I took it home and immediately took it all apart to see the condition, and how it worked. As soon as I saw how ruggedly simple the Hepburn design was I began selling off my small collection of 1894 Winchesters at gun shows, and buying Marlins with the money. Back then I could get 2 and sometimes 3 Marlins for every Winchester I sold, so it was great!
I still own that first 1893 Marlin that started the fire in me for more! Here it is with a Marlin marked mold, tong tool, and ammo for the .25-36M. It's also got a rare Whitney-Kennedy trapdoor buttplate serial numbered to the gun, and Lyman #7 globe, with one of a kind receiver sight. 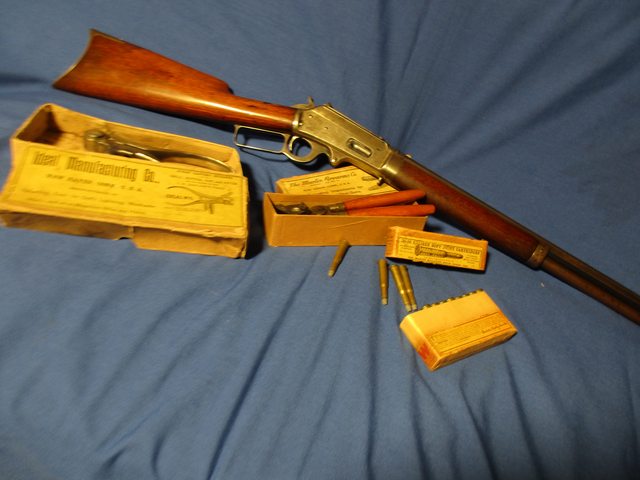 Marlinman 93 (or anyone who may know), what do you check to ensure everything is lined up after reassembling the gun. I replaced front firing pin and spring in my Model 93. Now the action requires much more effort than it did before. It was really smooth beforehand. I cleaned it and reassembled it. The lever action wouldn't go back - seemed like the hammer was interfering unless it was already cocked. Appreciate any tips or pointers to try to get his beauty back to smooth operations.

Since the only part you replaced was the firing pin, that's where I'd begin looking. I'd remove the breech bolt and look to see if the firing pin assembly (both halves, and the spring) are assembled correctly. If the pins or spring are binding, the hammer wont allow the bolt to travel over the hammer tip easily.
I'd also pull the buttstock, and make sure the mainspring is centered on the hammer, and hasn't shifted off to one side or the other. That could create a bind and even break the mainspring!
It's tough to get a Marlin together wrong, as most parts only go in one way, or not at all.
Marlin lever actions 1870's-WWI, Ballards, and single shot rifles!
Top

When I replaced the firing pin, I checked to see that the tip protruded from the end of the breech bolt and it did. The rear pin was loose so that it was angled unless it had pressure applied to force it up. I had the whole buttstock off and did play with the mainspring positioning to see if it affected anything. I will tear down the breech again. It didn't seem like it was "off". The spring fit in the slot and the pin slid right in.

Is there a particular position the firing pin should be when the breech bolt pins are hammered back in?
Top

Also, any tips for ensuring the mainspring is centered? It seems to want to be off center when I put it back. What I did was rotate it out of the way until I was ready and then rotated it back and used my hand to press it down and over to the hammer.
Top

I had a similar problem when I disassembled the Marlin Model 93 firing pin.
The front firing pin has an elliptical slot near the front. This must be precisely aligned with the pin hole. This restricts the forward and backward movement on the front firing pin.
It is a bit difficult to see but the pin should not go back in unless you have the correct alignment. What happened in my case was that the pin protruded ever so slightly creating friction. Make sure the pin is flush on both sides of the breech bolt and that you have not created any burrs on the pin or the hole with your punch.
The floppy rear firing pin is the "Marlin Safety". It only goes into alignment when the lever is fully closed. With the breech bolt open, you should be able to move the rear pin up easily with your finger tip.
Marlinman93 provided me with a useful tip about the mainspring.
Keep the screw a little loose so that it very easy to hold in the proper position. Then, holding the spring in position, tighten the screw.
That did the trick with my Model 93 and everything is very smooth.
Bill.
Top
Post Reply
9 posts • Page 1 of 1